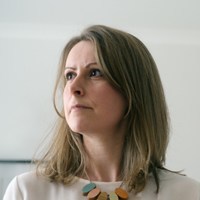 Victoria J. Dean is a photographic artist based in Northern Ireland. Her work has been exhibited and published internationally including the Royal Academy of Arts Summer Exhibition 2015 in London; Greetings From Ireland at The Library Project, PhotoIreland, Dublin and Triennial of Photography Hamburg, 2015; Circulation(s) 2014: Festival de la Jeune Photographie Européenne in Paris; Northern Ireland: 30 Years of Photography at Belfast Exposed and The Mac in Belfast, 2013 and the Magenta Foundation’s Flash Forward 2013 in Toronto, London and Boston. In 2007, Dean was named one of PDN’s 30 new and emerging photographers to watch. In 2010, she was featured at SCOPE New York and in Elective Perspective at Galeria Arsenał in Białystok, Poland.

Solo exhibitions have included RUA RED, Dublin in 2014; The Naughton Gallery at Queens University, Belfast in 2013 and the Millennium Court Arts Centre, Portadown, Northern Ireland in 2012. Her work is held in the Arts Council of Northern Ireland Collection and a number of private collections in the UK and Ireland.