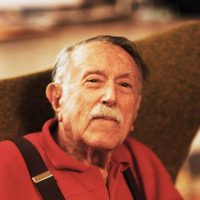 For over 72 years, Julius Shulman has played a seminal role in architectural photography. Best known for his iconic photographs of landmark buildings in the international modern style such as the 1947 Kaufman House in Palm Springs and the 1960 “Case Study House #22” in the Hollywood Hills designed by C. H. “Buck” Stahl and Pierre Koenig, Shulman’s images capture the futuristic energy of the Los Angeles and Southern California lifestyle, shaping its perception by the world.

Shulman moved to Los Angeles in 1920 as a boy and watched its transformation after World War II from a relatively small town surrounded by farmland to a modern city of international stature. In 1936, his self-initiated photographs of a Richard Neutra house lead to Neutra commissioning Shulman to photograph subsequent buildings. He was soon hired by other visionary architects, such as Rudolph Schindler and Frank Lloyd Wright, who were active in Los Angeles from the 1930s through the 1950s. Shulman’s images are characterized by an extraordinary sensitivity to the rhythmic interplay between interior living space and majestic vista that defines the Southern California international style.