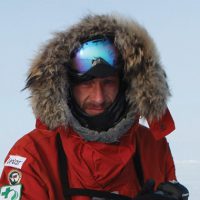 Sebastian Copeland is an award winning explorer, photographer and author. He has traveled more than 8,000 kilometers on skis across the planet’s biggest ice sheets. With expeditions across the Arctic sea, Greenland and Antarctica, Copeland has reached both poles on foot and earned four world records in the process.

Copeland’s photos have appeared in hundreds of publications worldwide, while his fine art prints have been seen in museums and galleries around the world. He is the recipient of the 2007 IPA Photographer of the Year award for his book, Antarctica: The Global Warning. His first film, Into The Cold, won many international awards.