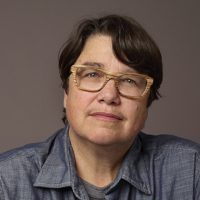 Catherine Opie is a photographer and photography professor at UCLA. Her work includes portrait series and American urban landscapes that range in format from large-scale color works to smaller black-and-white prints. Moving from the territory of the body to the framework of the city, Opie’s various photographic series are linked together by a conceptual framework of cultural portraiture. Opie has received numerous awards including the Smithsonian Archives of American Art Medal (2016), Julius Shulman Institute Award for Photography (2013), Women’s Caucus for Art: President’s Award for Lifetime Achievement (2009), United States Artists Fellowship (2006) and Washington University Freund Fellowship (1999), among others.

Opie’s work has been exhibited extensively throughout the United States, Europe and Japan. In 2008 a mid-career survey, “Catherine Opie: American Photographer,” was on view at the Solomon R. Guggenheim Museum in New York. Her book 700 Nimes Road, a portrait of Elizabeth Taylor, was recently published by Prestel. She is currently working on a monumental installation for the new Los Angeles Federal Courthouse, which will debut next summer. In the fall of 2017 the Henie Onstad Art Center in Oslo, Norway will host a major solo exhibition of her work.