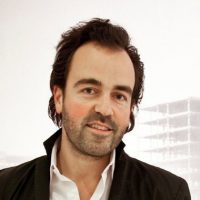 Dutch photographer Iwan Baan first fell unexpectedly into the subject of architecture in 2005 when he documented the construction of the Office for Metropolitan Architecture’s China Central Television (CCTV) building and Herzog & de Meuron’s completed National Olympic Stadium, both in Beijing.

Baan’s images appear frequently in The New York Times, Domus, Abitare, The New Yorker and more. He has contributed to current and upcoming exhibitions, including Small Scale, Big Change: New Architectures of Social Engagement at the Museum of Modern Art and Richard Neutra in Europe, which opened at the Marta Herford Museum in Germany and will travel to several other locations. Baan’s work has also been included in exhibitions at the Architectural Association in London and the AIA New York Chapter.

You see also like a community like that which is completely informal, people find ways to make it a place of themselves and create the kind of infrastructure which makes it work.