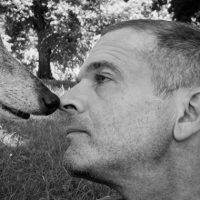 John Trotter worked as a newspaper photojournalist for 14 years, locally and internationally, until March 24, 1997, when he was nearly murdered by a half-dozen young men while on assignment for The Sacramento Bee. Photographs he took during his long recovery from his subsequent brain injury will be published in his forthcoming book The Burden of Memory.

In 2001, Trotter began photographing in Mexico for his project No Agua, No Vida about the human alteration of the Colorado River. He has photographed along the entire 1400-mile length of the river.