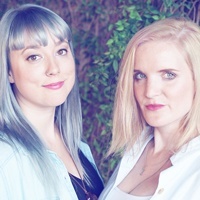 Lauren Strohacker and Kendra Sollars are both Arizona-based artists. Strohacker, born in Ohio, creates multidisciplinary interventions that examine the ever-growing conflict between humans and animals as our manufactured environments (physical and economical) expand into natural habitats. She received a BFA from The Ohio State University and an MFA from Arizona State University. Sollars, an Arizona Native, draws on her experience as a National Championship winning collegiate synchronized swimmer, coach and choreographer and artist/athlete in the production of Cirque du Soleil’s O. Sollars received a BA in Art from The Ohio State University and explores narrative through video, photography, performance and installation.

The artists’ collaborative project Animal Land was awarded a 2014 Contemporary Forum Emerging Artist Grant by the Phoenix Art Museum and a 2015 Artist Research & Development Grant by the Arizona Commission on the Arts. Animal Land has been exhibited at the Mesa Arts Center as part of IN FLUX cycle 5, Phoenix Art Museum’s Emerging Artist Exhibition and at the Tucson Art Museum as part of the 2015 Arizona Biennial. Strohacker and Sollars were both named two of the top 100 creatives in the city by the Phoenix New Times in 2014.