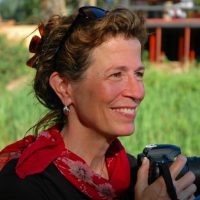 Photographer Annie Griffiths has photographed in nearly 150 countries during her illustrious career. Her work has been featured in dozens of National Geographic articles and books. She has received numerous awards, including honors from the National Press Photographers Association, the National Organization of Woman and the White House News Photographers Association. Griffiths is also the Founder and Executive Director of Ripple Effect Images, a collective of National Geographic photographers who document programs that are empowering women and girls in the developing world.