Skip to main content
Photo by: Jeff and Andrew Topham 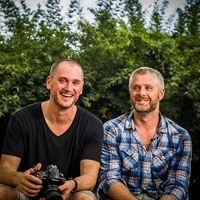 In 2010, brothers Jeff and Andrew Topham returned to the war-torn West African country of their childhood, Liberia. Discovering that much of Liberia’s photographic record of its peaceful past had been destroyed by war, they created a documentary and online photo project culminating in an exhibition that was housed at the National Museum in Monrovia.