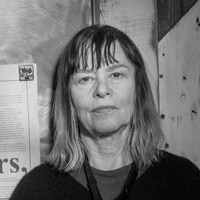 Donna Ferrato is a documentary photographer from Lorain, Ohio. She has published four books including Living with the Enemy and Love & Lust; as well as participating in over 500 one-woman shows internationally. Ferrato has received awards such as the W. Eugene Smith Grant (1986) and the Robert F. Kennedy Award for Humanistic Photography (1987). In 2016, Time magazine announced her photograph of a woman being hit by her husband (“Behind Closed Doors”) as one of the “100 Most Influential Photographs of All Time.”

Currently, Ferrato is documenting her rapidly changing New York neighborhood of Tribeca for a new book and leads international experimental photography workshops. She also has a traveling retrospective, first exhibited in Italy at the 2017 Cortona on the Move festival, called American Woman: 40 Years, which brings all of Ferrato’s lifelong projects—domestic violence, sex, Tribeca, assignment work, and family life—together for the first time.