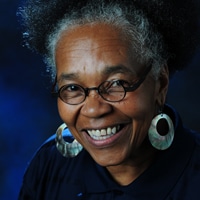 Sharon Farmer has been a professional photojournalist and exhibition photographer for more than 40 years, shooting news stories, political campaigns, cultural events, conferences, and portraits. Most notably, Farmer was the first African-American woman to be hired as a White House photographer, as well as the first African American and first woman to become Director of the White House Photography office. She served as Director of the White House Photography Office from 1999-2001, and as White House photographer from 1993, documenting the beginning of the Clinton-Gore Administration.

Formerly an assignment editor for the Associated Press, she was part of the AP team in 2003 that covered the Super Bowl in San Diego, California. She was also the campaign photographer for Sen. John Kerry’s presidential election campaign in 2004. Over the years she has photographed for The Washington Post, the Smithsonian Institution, the American Association for the Advancement of Science, the Leadership Conference on Civil and Human Rights, the National Urban League, the Brookings Institution, and Delta Sigma Theta Sorority, Inc. to name a few.

Her photographic work resides in the collections of the Clinton Presidential Library, the National Archives, the Library of Congress, Howard University’s Moreland-Spingarn Collection, the District of Columbia Government; the Anacostia Museum and the National Museum of African American History & Culture of the Smithsonian Institution; the King Arts Complex in Columbus, Ohio, the South African Museum in Pretoria and in private collections.

Sharon Farmer majored in photography and minored in music at Ohio State University in Columbus, Ohio, where she received her Bachelor of Arts degree.