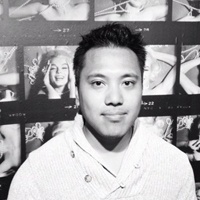 Jeric Pio Agustin is a New York City based photographer specializing in editorial assignments and advertising campaigns. Before photography, he played pro paintball from 1998-2008 competing in circuits throughout North America and Europe. While training in Moscow towards the end of his career, he developed a passion for photography and decided to pursue art. He studied photo and film at Art Center College of Design in his hometown Los Angeles. On his last semester, he was offered to manage various studios in New York City where he currently resides since 2012.