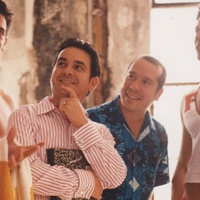 Alexis Rodríguez-Duarte and Tico Torres have been documenting the Cuban diaspora since 1993 for a portrait series entitled, Cuba Out of Cuba. The Smithsonian Institution’s National Portrait Gallery now has a portfolio of 18 portraits from the Cuba Out of Cuba series in their permanent collection. Torres, a fashion stylist who is a master of the mise-en-scène, helped create the scene of the joyous image of Celia Cruz standing amid the towering palms of Fairchild Tropical Garden in a traditional ruffled Cuban “guarachera” gown which the National Portrait Gallery has called the iconic photograph of Celia. Both Rodríguez-Duarte and Torres were born in Havana until their families left the island on the Freedom Flights to eventually settle in Miami.

Rodríguez-Duarte, in collaboration with Torres, have photographed some of the world’s leading artists, celebrities and public figures such as Jeff Koons, Madonna, Maurizio Cattelan, Andy Garcia, Carolina Herrera, Gloria Vanderbilt and Enrique Iglesias, among others. Their work has appeared in The New Yorker, Vanity Fair, Town & Country, and Harper’s Bazaar, among other major publications. Their photographs have been exhibited at the Smithsonian Institution’s National Museum of American History, the Victoria & Albert Museum in London, Los Angeles County Museum of Art, Lowe Art Museum at the University of Miami, Museum of the City of New York, the Bass Museum (Miami Beach), Museum of Fine Arts (Houston, Texas), Museum of Art & Design (Miami), Lehigh University Art Galleries, the Bronx Museum, the Coral Gables Museum and the Leslie Lohman Museum of Gay and Lesbian Art (New York), among others. Their collaborations are also in many private and public collections.