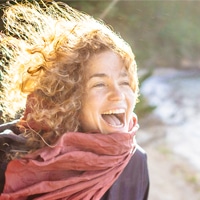 Caledonia Curry – whose work appears under the name Swoon – is a Brooklyn-based artist and is widely known as the first woman to gain large-scale recognition in the male-dominated world of street art. Callie took to the streets of New York while attending the Pratt Institute of Art in 1999, pasting her paper portraits to the sides of buildings with the goal of making art and the public space of the city more accessible.

In a moment when contemporary art often holds a conflicted relationship to beauty, Curry’s work carries with it an earnestness, treating the beautiful as sublime even as she explores the darker sides of her subjects. Her work has become known for marrying the whimsical to the grounded, often weaving slivers of fairy-tales and scraps of myth with a recurring motif of the sacred feminine. Tendrils of her own family history – and a legacy of her parents’ struggles with addiction and substance abuse – recur throughout her work.

While much of Curry’s art plays with the fantastical, there is also a strong element of realism. This can be seen in her myriad social endeavors, including a long-term community revitalization project in Braddock, Pennsylvania and her efforts to build earthquake-resistant homes in Haiti through Konbit Shelter. Her nonprofit, the Heliotrope Foundation, was created in order to further support these ventures.

Curry’s work can be found on the sides of buildings worldwide and has been given both permanent and transient homes in more classical institutions, including New York’s Museum of Modern Art, the Institute of Contemporary Art in Boston, the Tate Modern, and the São Paulo Museum of Art. Most recently, she has begun using film animation to explore the boundaries of visual storytelling.