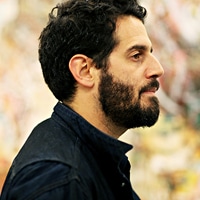 José Parlá has emerged in the past decade as one of his generation’s most fervent champions of painting, working for more than 20 years to establish a style of that transforms the language of the street into a hybrid form of abstraction and urban realism. From the outset of his career, Parlá has sought to interpret his experience of cities that have served as crossroads in his life – from Miami to Brooklyn, San Juan to Havana, and internationally – as a central theme in his work, while purposefully engaging with the rich history of painting since the rise of abstraction in the 1950s. His work provides markers of time, about the accumulation of information that settles like accretions upon the surfaces of walls and streets, and in the lines on the hands and faces of the people who inhabit them.