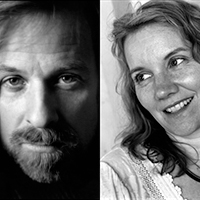 Alex Webb has published 16 books, including The Suffering of Light, a survey of 30 years of his color photographs. He’s exhibited at museums worldwide including the Whitney Museum of American Art, NY, the High Museum of Art, Atlanta, and the Museum of Fine Arts, Boston. A Magnum Photos member since 1979, his work has appeared in The New York Times Magazine, National Geographic, and other publications. He has received numerous awards, including a Guggenheim Fellowship in 2007.  His most recent books are La Calle: Photographs from Mexico and Slant Rhymes, the latter with Rebecca Norris Webb.

Originally a poet, Rebecca Norris Webb often interweaves text and photographs in her six books, most notably with her monograph, My Dakota—an elegy for her brother who died unexpectedly, also the subject of her solo exhibition at the Cleveland Museum of Art in 2015.  Her work has appeared in The New Yorker, The New York Times Magazine, National Geographic, and is in the collections of the Museum of Fine Arts, Boston, Cleveland Museum of Art, and George Eastman Museum, Rochester, NY. A new edition of Violet Isle: A Duet of Photographs from Cuba (with Alex Webb) will be published in 2018.