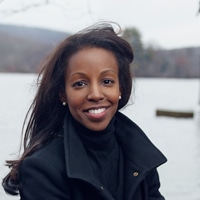 Sarah Lewis is an Assistant Professor at Harvard, in the Departments of History of Art and Architecture and African and African American Studies. She has spoken on the TED main stage and at SXSW, appeared on Oprah’s “Power List,” served on President Obama’s Arts Policy Committee, and has been featured in Vogue. She has held positions at Yale’s School of Art, the Tate Modern, and the Museum of Modern Art in New York. Lewis’ essays have been published in Artforum and Smithsonian, she is the author of the bestselling book The Rise: Creativity, the Gift of Failure, and the Search for Mastery, and her book on Frederick Douglass is forthcoming from Harvard University Press. She received her B.A. from Harvard University, MPhil from the University of Oxford, and Ph.D. from Yale.