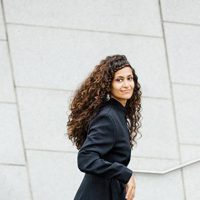 Malin Fezehai‘s work focuses on communities of displacement and dislocation around the world. She has filmed on the sinking islands of Kiribati, photographed underage workers in Ethiopia and reported on the war torn lives of women in Sri Lanka. In 2014, her work on the African asylum seekers living life in detention centers in Southern Israel was LightBox feature for TIME.

Fezehai is the recipient of a 2015 World Press Photo Award, the Wallis Annenberg Prize and was named one of the 30 Emerging Photographers to watch in 2015 by PDN. Her image depicting a Wedding of Eritrean Refugees in Israel was the first iPhone image to ever receive a World Press Photo Award. Some of her clients include TIME, The New York Times, The New Yorker, Fader Magazine and Nike. She is also a contributor to the Everydayusa Instagram feed.