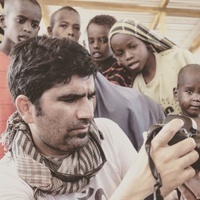 Hossein Fatemi began his career in photography in 1997. Since then he has travelled extensively and worked in Lebanon, Pakistan, Turkey, Iran, Iraq, Georgia, Russia, India, Somalia, Kenya, Afghanistan and Bangladesh.

Hossein has documented the life of Iranian youth and daily life in his native country while continuing to shoot news and current affairs stories.

He has received numerous awards including POYi, LensCulture, Days Japan, Unicef and CHIPP. He has also been awarded a grant to work on his personal projects from The Art of Photography Show in San Diego, USA.

After a few years covering the war in Afghanistan, he is now based in Chicago, USA.