Annenberg Space for Photography has partnered with hip-hop pizza shop Delicious Pizza to host a free film screening series this summer, on the second Saturday of the month. Each showing will include a brief talk, conversation, and Q&A with the artists involved in the making of the film, a free slice of pizza, and sets by Delicious Vinyl DJs. First up will be Wild Style, hosted by CONTACT HIGH Creative Director Fab 5 Freddy, who also stars in this iconic film. 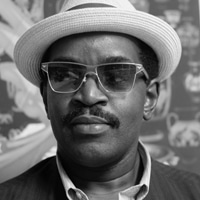 That line was Fab’s calling card and introduction to the world of pop culture. He initially exploded onto the scene in the late ’70s as one of the first graffiti artists to exhibit his paintings internationally. Along with close friends and contemporaries Futura 2000, Keith Haring, Jean Michele Basquiat, Lee Quinones, and others, Fab was key to getting the art world to realize New York graffiti was spawning an art movement that would eventually pulsate globally up through today, and give birth to street art.

Like many creative figures from the New York downtown scene in the ’80s, Fab would explore other modes of creative expression. At the seminal Times Square Art show that featured his work, he would link up with budding filmmaker Charlie Ahearn and come up with the idea that eventually became the cult classic and first film on hip-hop culture, Wild Style, which he also produced, stars in, and composed all the original music for.

After numerous solo exhibits and group shows in the late ’80s, Fab wanted to reach a broader audience so he decided to expand on his experiences making the film Wild Style and direct music videos. His first assignment was the song “My Philosophy” for hip-hop legend KRS-ONE. Fab would go on to direct numerous videos and commercials for artists like Queen Latifah, Nas, and Snoop Dogg, as well as companies like Pepsi.

But shortly after settling in behind the camera in the late ‘80s, MTV – feeling the cultural pressure – asked him to host a program called YO! MTV Raps, which immediately became the highest-rated show on the channel and blasted hip-hop culture into the living rooms of mainstream America and millions more on several continents and countries around the world.

Nearly 10 years later, Fab departed MTV to embark on business ventures including a brief stint as the head of independent label Pallas Records, where he signed, executive produced, and created all the visuals for the million-selling Chicago rap group Crucial Conflict.

While continuing to satisfy his creative passion with art, film, music, and television projects, Fab, considered one of Hip Hop’s architects and pioneers, has lectured at schools and universities around the world, published numerous articles for various publications including Vibe, XXL, The New York Times Magazine, written a book on hip-hop slang titled Fresh Fly Flavor: Words and Phrases of the Hip-Hop Generation, and served as an executive producer for the VH1 Hip-Hop Honors TV specials.

2019 is shaping up to be a new breakthrough year for this legend. Fab makes his feature-length directorial debut with the Netflix documentary Grass Is Greener, which takes an unparalleled look at the history of cannabis usage in America through the lens of popular forms of music — jazz, reggae, and hip-hop — while also examining the racial disparities and injustices within that world. An accompanying soundtrack album inspired by the film — produced by Salaam Remi, who composed all the original music and score for Grass Is Greener— was released the same day as the film premiere. It includes music from The LOX, Styles P, Sheek Louch and Jadakiss, Stephen Marley, Spragga Benz, Bun B, Berner, Smif-N-Wessun, Betty Wright, Black Thought, and more.

Delicious Pizza is a hip-hop pizza shop founded in 2015 by father-son duo Fred and Travis Sutherland and Delicious Vinyl founder Mike Ross and brother Rick Ross. Located in L.A.’s West Adams neighborhood and on the iconic Sunset blvd. in Hollywood, the restaurant’s high-quality pies and golden-era hip-hop memorabilia has made it a destination for local residents and music fans alike. Tourists in Hollywood from all over the world flock to Delicious for that unique experience of music and food. Memorabilia from the golden era of hip-hop lines the walls and the speakers are always blasting something cool from the old school.

The West Adams Block Party, one of the many community events hosted by The Ross Brother’s & Delicious Pizza;  has featured artists Talib Kweli, KRS-One, Doug E. Fresh, Masta Ace, Mellow Man Ace & many others,  will take place this year on Sunday Sept 1, 2019.