The Cuba Archive: Photography from the 1990s

Over the course of six years and 12 month-long trips to Cuba in the 1990s, photographer Tria Giovan returned home to New York City with over 25,000 images of the Caribbean island. At that time, Cuba was enduring a time of austerity, known as the “Special Period,” when the collapse of the Soviet Union left its future uncertain. Giovan discusses the process behind her decision to re-edit 450 of her images nearly 25 years later, revealing how political changes altered the landscape she captured decades ago. 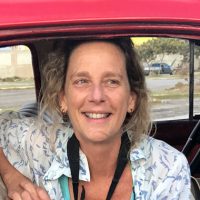 During her 25-year career, Tria Giovan’s work—in places ranging from Cuba to the Philippines to the eastern end of Long Island—is defined by her diverse, in-depth, timely and thoughtful exploration of her subjects. In 1990, she began a project that would comprise 12 month-long trips to Cuba over a six-year period. The resulting…