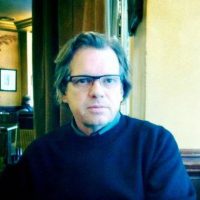 Yves Gellie was born in Bordeaux, France, on September 16th, 1953. After medical studies at the University of Bordeaux, he practiced tropical medecine in Gabon for two years. In 1981, he began his career in photo-journalism with a feature about cocaine production in Colombia, followed by a story about war refugees in Ogaden, Somalia.

His work being between Photo Journalism and Contemporary Art, he has developed a style described as an iconographic selection of the reality underlying the day-to-day life and its trivial aspects.