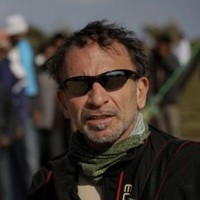 Yannis Behrakis was born in 1960 in Athens, Greece. He studied photography in the Athens School of Arts and Technology and received his BA (Honours) from Middlesex University. He worked as a studio photographer in Athens in 1985-86. In 1987 he started work for Reuters and in late 1988 he was offered a staff job with the agency based in Athens. His first foreign assignment was to cover Libya crisis on January 1989. Since then he documented a variety of events including the funeral of Ayatollah Khomeini in Iran, the changes in Eastern Europe and the Balkans, the civil conflicts in Croatia, Bosnia and Kosovo, the wars in Chechnya, Sierra Leone, Somalia, Afghanistan, Lebanon the first and second Gulf wars the Arab Spring in Egypt, Libya and Tunisia. He has also covered the Israeli-Palestinian conflict for many years, earthquakes in Kashmir, Turkey, Greece and Iran and major news events around the world. He has also covered four Summer Olympics, the 1994 World Cup in the US and many international sports events. He has moved with Reuters in Jerusalem as the chief photographer for Israel and the Palestinian Territories in 2008/9.

He has received numerous awards, such as seven times News Photographer of the Year by the Greek National Fuji Awards and three times European photojournalist of the year by Fuji in London 1999, Barcelona 2002 and Rome 2004. In 2000 he received the John Faber award from the Overseas Press Club of America in New York. In 2000 he received the most prestigious Greek journalistic prize, the Botsis Foundation Award. In 2000, first prize in the General News Stories category, by the World Press Photo Foundation. In the 2002 Bayeux Awards for war correspondents, he won the second prize in the photography category for his pictures of the liberation of Kabul, as well the Prix de Public (the public’s choice award). He has also won in 2004 and 2009 awards in the China International Press Photo Contest.