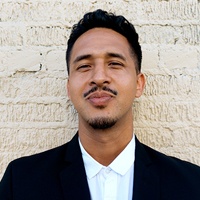 Walter Thompson-Hernandez is a photographer, documentary filmmaker and currently a first year PhD student at the UCLA Chicana and Chicano Studies Department. His projects have been featured by CNN, BBC, Los Angeles Times, Remezcla and Univision.

Outside of his work at CSII, Thompson-Hernandez’s research looks at issues related to immigration, race, Afro-Latinos and sports in the United States, Latin America and Europe. His research and projects have been featured by CNN, BBC, Los Angeles Times, Remezcla and UNIVISION. His latest academic project will be featured in a forthcoming book titled, Afro-Latinos in Movement: Critical Approaches to Blackness and Transnationalism in the Americas.