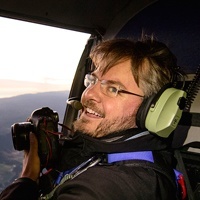 Vincent Laforet is the photographer, filmmaker and director who is responsible for capturing the images that have developed into “AIR,” a worldwide series of photographs of major cities. Laforet’s career has spanned over 25 years with achievements including a Pulitzer Prize for Feature Photography for his work as a photojournalist at The New York Times, revolutionizing the independent film industry through his pioneering work with DSLR and the completion of a commercial for Nike in 2014.