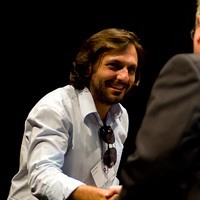 Uriel Sinai has been widely recognized for his photographs. In 2005 he’s coverage of Israel’s disengagement from Gaza earned him the first place story prize from the “World Press Photo” contest. In 2009 he was awarded second place at the Prix Bayeux-Calvados for his coverage of the war in georgia, and he was named the 2008 Magazine Photographer of the Year from Picture of the Year International. He ahs also won awards from the National Press Photographers Association, the China International Press Photo Contest in 2007 and 2008, and the Days Japan Photojournalism Award in 2007. In 2012, Sinai co directed the Documentary film “Numbered”, winning awards worldwide both as a director and a Cinematographer of the film.