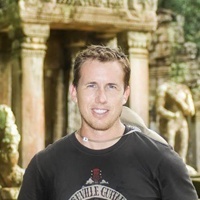 Trey Ratcliff‘s site StuckInCustoms.com has become the #1 Travel Photography Blog on the Internet. On average, Trey’s photos get over a million views per week. Trey’s work first became popular after one of his photos was the first HDR photo ever to hang in the Smithsonian. Trey has since been featured on the BBC, ABC, FOX, CBS, and NBC, and have had numerous showings around the world.