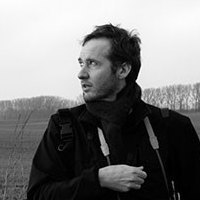 In 2006 Tomas Van Houtryve was named one of PDN’s 30 Emerging Photographers. He was awarded an Alicia Patterson Journalism Fellowship in 2008, and in 2010 he was named the POYi Photographer of the Year.

In 2013 Tomas began working on Blue Sky Days, a drone’s-eye view of America. Images from the project were first published in Harper’s as the largest photo portfolio in the magazine’s 164-year history. The series was awarded the 2015 ICP Infinity Award and honors from POYi, World Press Photo, and the White House News Photographer’s Association.

Tomas has had solo exhibitions of his work in Paris, New York City, Spain and Italy. Many of his photographs of intense political actions are distinguished by their intimacy.