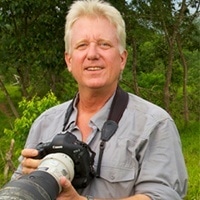 Steve Winter has been a photographer for National Geographic for over two decades. He specializes in wildlife, and particularly, big cats. Winter has been named BBC Wildlife Photographer of the Year and BBC Wildlife Photojournalist of the Year, was a two-time winner of PoYI’s Global Vision Award and won first prize in the nature story category from World Press Photo in 2008 and 2014. He lectures globally on photography and conservation issues and has appeared on CBS Nightly News, 60 Minutes, NPR, BBC, CNN, NG WILD and other media outlets.

Winter feels that he has a great responsibility not only to show and excite readers about the natural world, but about its fascinating people and cultures as well. Above all, he wants to give National Geographic readers what he always wanted — a front row seat next to the photographer and writer, and to be part of the team along for the adventure.