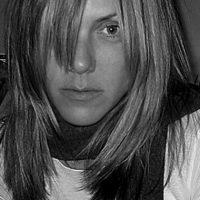 From her earliest published work to recent commissions for Esquire, Harper’s, Flaunt, Interview, Arena UK and Elle, each of Sheryl Nields‘ images testifies to a creative environment in which intensity and spontaneity are fused in balance.

Nields’ portraits are the product of an infectious, unguarded energy that fuels those surrounding her and creates an atmosphere of collaborative unpredictability. Her subjects have included Charlize Theron, Diane Lane, Ben Stiller, Tobey Maguire, Milla Jovovich, Naomi Watts, Sheryl Crow and Prince. She also photographed Dita Von Teese for, an intimate and playful view of the burlesque dancer in a collectable flipbook, called Dita: Stripteese.

A graduate of the Parsons School of Design, Nields was awarded the 2005 Lucie Award for Fashion Layout of the Year for a piece featuring frequent collaborator/subject Scarlett Johansson.