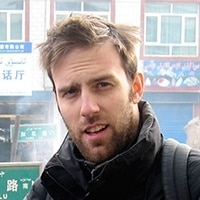 After obtaining a degree in International Politics from the University of Toronto in 2001, Ryan Pyle realized a lifelong dream and moved to China permanently. In 2004, Pyle became a regular contributor to The New York Times, and in 2009, he was listed by PDN as one of 30 emerging photographers to watch.

In 2010, Pyle began working full-time on television and documentary film production and has produced and presented several large multi-episode television series for major broadcasters in the US, Canada, UK, Asia, China and continental Europe.