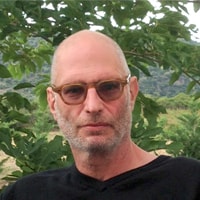 Robert Herman has been a street photographer since his days as an NYU film student back in the late ‘70s. His first photo book, The New Yorkers, is a true self-publishing success story. After receiving numerous offers from mainstream publishers, Hern decided to maintain control of the process both creatively and financially by founding Proof Positive Press to release the book in 2013. It is comprised of photographs of New York City shot on Kodachrome between 1978 and 2005. His second monograph, The Phone Book (Schiffer, 2015), is Herman’s collection of iPhone photographs taken using the “Hipstamatic” app’s square format as he traveled the world.

In 2015, Herman’s work from The New Yorkers was the subject of a comprehensive solo exhibition at the Amerika Haus in Munich, Germany. His photographs are part of the permanent collections of The George Eastman House and the Telfair Museum. He has a B.F.A. in filmmaking from the Tisch School of the Arts at New York University and a master’s degree in digital photography from the School of Visual Arts.

Continuing to this day are his love of light and color, and his passion for making images that find the transcendent in the seemingly mundane.