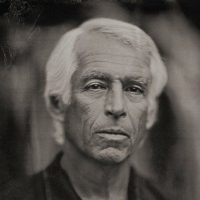 Photographer Richard Ehrlich‘s goal comes from a desire to express internal feelings rather than to depict simply what is seen and as such provides an avenue for heightened awareness and self expression. Rather than viewing digital optimization as pejorative or less meaningful than traditional techniques, Ehrlich has embraced the advancing technology with enthusiasm. For example, his “Anatomia Digitale” series depicts permutations and interpretations of radiological based images as a basis for artistic expression and celebration of the beauty of the human form. The “Homage to Rothko” series of Malibu skies represents a paean to one of his favorite painters whose work has been an inspirational foundation for many years. The “Imaginary Place” series conveys a sense of timelessness and ephemeral space.

These and other images have been the subject of over 30 gallery shows and the work is represented in the permanent collections in over 25 museums including Los Angeles County Museum, UCLA Hammer Museum, Smithsonian Institute, George Eastman House, Denver Art Museum, United States Holocaust Memorial Museum, Jewish Museum New York and Jewish Museum Berlin, among others.