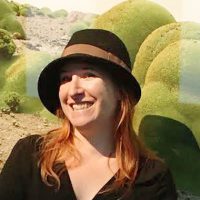 Rachel Sussman is a contemporary artist based in Brooklyn. She is a Guggenheim, NYFA and MacDowell Colony Fellow and has spoken on the TED main stage and at the Long Now Foundation. She is a member of Al Gore’s Climate Reality Leadership Corps. Her book, The Oldest Living Things in the World, a New York Times Bestseller, was published by in 2014 with forewords by Hans Ulrich Obrist and Carl Zimmer. She has been profiled and featured in The New Yorker, The New York Times, Wall Street Journal, The Guardian, BBC, and NPR’s Picture Show and Science Friday, among others. In 2014, she was awarded the LACMA Lab Art+Tech grant to peruse new work new work exploring deep time and deep space in conjunction with SpaceX, NASA JPL, NASA Ames and CERN. Sussman has exhibited internationally, and her work can be found in museum, corporate, private and university collections.