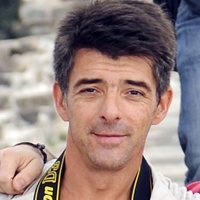 Philippe Desmazes was the first photojournalist on the scene of Muammar el-Qaddafi’s capture in Surt, Libya, on October 20, 2011, but by the time he arrived, the dictator had already been taken away. Fortunately, nearby rebels had filmed his arrest. As they gathered round to block the desert sunlight, Desmazes photographed the screen of a soldier’s camera phone and transmitted this image to the French news agency AFP. Within minutes, it was broadcast worldwide.