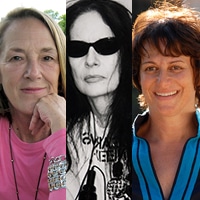 MTV hijacked the music business and forced the creation of a new business model with their internal staff and how artists were signed to contracts and marketed to music fans. Film director Penelope Spheeris, MTV’s original talent coordinator Gale Sparrow and Buzztone CEO Liz Heller, were three of those on the front lines in the early days of MTV.

Sparrow started her career in the music business with CBS Records in 1976. In 1981, she joined MTV’s startup team as the talent coordinator. As MTV grew, so did the responsibilities of her department, and she became Director of Talent and Artist Relations. Sparrow is currently on the Executive Board of The Phillips’ Mill Community Association and is involved in their preservation of the arts and fundraising efforts.

Heller is a recognized media innovator and entertainment industry pioneer, whose award-winning career spans film, music and technology. She is the founder of Buzztone, an innovative marketing company dedicated to engaging consumers and designing brand-building experiences for clients. At Buzztone, Heller tackles a wide variety of challenges in the constantly evolving digital sphere. Her clients include global brands such as TOMS, Pepsi and JoinRED.