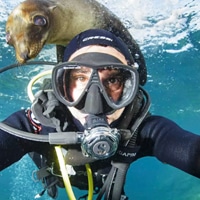 Dr. Aburto obtained his Ph.D. at the Center of Marine Biodiversity and Conservation at SIO and was honored with the Jean Fort Award by the University of California, San Diego for his significant contribution to an issue of public concern through his doctoral research. As a Kathryn Fuller and Hellman Fellow, his research and photographs have focused on marine-protected areas and commercially exploited marine species in Mexico, Belize, Costa Rica, Ecuador, and the United States. His photographs have been part of several conservation projects worldwide and have won international photography contests, including gold place in the 2016 Our World Underwater photography competition.