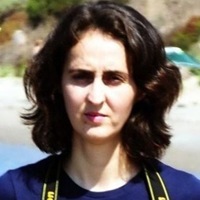 Nilüfer Demir is a Turkish photojournalist and photographer based in Bodrum, Turkey. She worked with Doğan News Agency since she was a teenager. She covered the European migrant crisis during the summer of 2015 and her photographs of Alan Kurdi became world news on 2 September 2015. She came across the body of Kurdi on the beach and took a number of photos.

She said that she felt “petrified” upon seeing the corpse of the toddler. Then she took the pictures to share her feelings.

Demir’s photograph of Kurdi has been compared with iconic photos that changed the world. In March 2016 her photograph was the subject of a Dutch documentary about iconic photos, and specifically why this photo was not selected for the World Press Photo, though it had resulted in many different reactions across Europe that changed the attitude of many people about the European migrant crisis. The winning World Press photo of 2015 showed a child migrant that successfully crossed into Europe and thus communicated hope rather than despair.