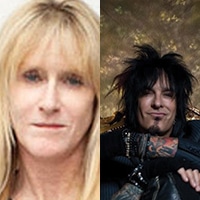 As a member of Mötley Crüe, Nikki Sixx is a Grammy-nominated musician with over 80 million album sales to date. He is a New York Times bestselling author, having written three books: The Heroin Diaries, The Dirt (written with his Mötley Crüe band mates) and his current book, This is Gonna Hurt: Photography and Life Through the Distorted Lens of Nikki Sixx.

Kristine McKenna is a widely published critic and journalist who wrote for the Los Angeles Times from 1977 through 1998. Her profiles and criticism have appeared in Artforum, The New York Times, Artnews, Vanity Fair, The Washington Post and Rolling Stone. A collection of her interviews, Book of Changes, was published in 2001 followed by a second volume, Talk To Her, in 2004. In 2009, she organized She: Work by Wallace Berman & Richard Prince, which was presented at the Michael Kohn Gallery.