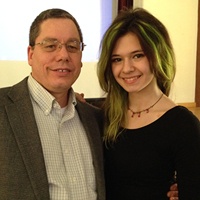 Nicole Maines has been recognized nationally for fighting to ensure that transgender students have the same rights as their classmates. In January 2014 the Maine Supreme Court ruled that her rights had been violated under the state’s Human Rights Act, marking a historic victory for transgender youth in the U.S. It is the first time a state’s highest court has ruled that it is unlawful to deny transgender students access to the bathroom of the gender they identify with.

When she was just 13 Nicole worked closely with GLAAD, Equality Maine, the ACLU and the Maine Women’s Lobby to defeat LD 1046, a bill that would have rolled back transgender protections in Maine.

For her hard work and commitment Nicole was named one of Glamour magazine’s “50 Inspiring Women of the Year” and chosen to represent her state in the magazine’s “Women of the Year Awards” issue. The Maine ACLU, Equality Maine and Healthy Girls and Hardy Women have also recognized Nicole for her courage, strength and commitment to promoting change.

In 2015 Nicole was featured in the New York Times Best Seller Becoming Nicole: The Transformation of an American Family, which was named one of the 10 best books of the year by People magazine. She was recently a guest star on the TV series “Royal Pains,” airing on the USA Network, and the episode won a GLAAD Media Award.

After adopting Nicole, Wayne Maines began to question his long-held views on gender and identity, to accept and embrace Nicole’s and to undergo an emotionally wrenching transformation of his own. An Air Force veteran and Republican, Wayne overcame his deepest fears to become a vocal advocate for trans rights.