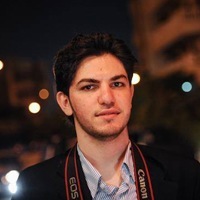 Mosa’ab Elshamy, born in 1990, is a Cairo-based photographer at the Associated Press, who covers daily news stories, as well as in-depth cultural and social documentary projects across the Middle East. His work has been described as dedicated, humane and intimate.

In 2013, TIME picked one of his photographs from the violence in Rabaa, Egypt, among its best 10 photos of the year. He won an Award of Excellence from Pictures of the Year International competition for the same image. He was then selected by PDN among its 30 Emerging Photographers in 2014, as well as one of the Guardian’s Top 10 Youth in Digital Media for his use of social media to bring focus to his work and country’s tumultuous events. In 2014, he won The Bob’s award that recognized his work from the streets of Cairo.