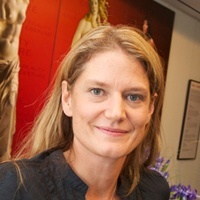 Mona Kuhn is best known for her large-scale, dream-like photographs of nudes. Her work often reference classical themes with a light and insightful touch. Her first monograph, Photographs, was debut by Steidl in 2004 and immediately followed by Evidence in 2007, Native in 2010 and Bordeaux Series in 2011. She is currently an independent scholar at The Getty Research Institute in Los Angeles.

Kuhn’s work has been exhibited and/or included in the collections of The J.Paul Getty Museum, The Los Angeles County Museum of Art, The Pérez Art Museum in Miami, The Museum of Photographic Art in San Diego, The George Eastman House, the Griffin Museum in Boston, Miami Museum of Art, the Cincinnati Art Museum, North Carolina Museum of Art, Georgia Museum of Art and The International Center of Photography in NYC. In Europe, her work has been exhibited at the Royal Academy of Art in London England, Le Louvre in France, Deichtorhallen in Hamburg Germany, Musée de l’Élysée in Switzerland, Centre d’art Contemporain at Musée Chaleroi in France, the Leopold Museum in Vienna Austria and the Australian Center for Photography in Sydney.