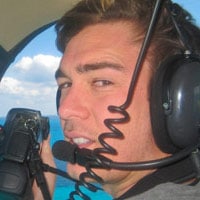 Mike Theiss has documented 24 landfalling hurricanes, over 50 tornados, dozens of waterspouts and numerous other weather events. He spent one week shooting on the summit of Mt. Washington in harsh temperatures of -40°C and with winds over 100mph. Theiss received an Emmy nomination for documenting Hurricane Katrina’s historic 28-foot storm surge from the frontlines in Gulfport, Mississippi. He was recognized by NOAA and the National Hurricane Center for documenting Hurricane Charley – recording 155mph winds and a record pressure of 942mb inside Charley’s eye from his SUV.

Theiss’ photography is regularly seen on National Geographic Channel, Discovery Channel and The Weather Channel, among other networks. His accomplishments include a Second Place NPPA award for “Spot News” in 2006, winning PDN’s “World in Focus” contest and co-authoring the award-winning book Hurricane Katrina: Through the Eyes of Storm Chasers.