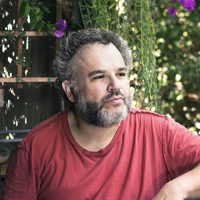 Michael Lewis began taking pictures in 1989, using the camera his father bought in Vietnam in 1969. After receiving an M.F.A. in 1996, he began working commercially, mostly as an editorial portrait photographer. In addition to taking commissioned portraits, he felt compelled to take pictures of himself. Self-portraiture has allowed Lewis to experience empathy for the people he photographs. He feels an obligation to his subjects to remain aware of the vulnerability they feel when being in front of a camera.