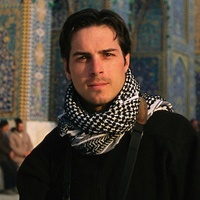 Photojournalist and filmmaker Matt Moyer is known for his intimate storytelling that honors the lives of everyday people. Moyer has completed multiple stories for National Geographic Magazine and worked on assignment for many other publications including The New York Times and The Guardian. Moyer was named a Knight Wallace Journalism Fellow at the University of Michigan in 2008 and received the Knight Fellowship at Ohio University in 2012. Currently, he is filming two documentaries and working on a photography project about the Christians of Egypt.