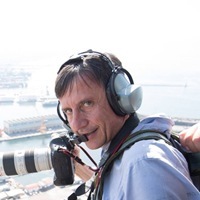 Massimo Sestini was born in Prato, Florence, in 1963. Self-taught, he started taking pictures in high school, photographing rock concerts and the news for local papers.

His first scoop in mid Eighties: the image of the Train 904 bombing achieved him his first cover on Stern.

He then founded Massimo Sestini News Picture to cover local news, and started focusing both on great news and on celebrities’ private life stolen images. It’s the beginning of his career as paparazzo, but the approach to photography remained the same: covering the news, by being there.

He then worked for the most important agencies and newsmagazines. Aerial pictures became a regular feature: the 2000 Jubilee, the G8 in Genoa, the funeral of Pope John Paul II.

Since 2007 he has worked as an advisor and collaborator to several institutions. In 2012, he dived with the Italian Police in the Costa Concordia that had just sunk. He then worked for the Italian Navy on the project Un Sogno lungo 100 giorni. In 2014, he was aboard the “Bergamini frigate”, to follow the rescue operation Mare Nostrum off the Libyan Coasts. His picture from the helicopter of boat of migrants won him a 2015 Word Press Photo in General News Category.