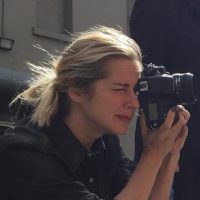 Mary Rozzi is an American photographer based in Los Angeles, New York and London. Rozzi gained an early foothold in the industry by assisting such renowned photographers as Satosi Saikusa, Michael Comte, and David LaChapelle. Rozzi ventured out of New York City in 2000 for Paris – undoing reliance on language and community. This next decade of working allowed her to focus on the soft subtleties of the visual world from a raw unobtrusive perspective. Rozzi’s work excels at catapulting viewers intoa world commanded by a woman framed neither by her vulnerability nor by the feminine mystique but empowered by the space from which they lace together. Rozzi has begun accelerating into the role of Director on video shorts and commercial pieces for clients including La Perla, Jerome C Rousseau and editorials by Louis Vuitton.