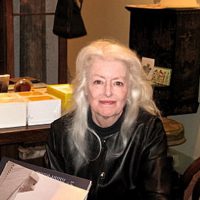 Lynn Davis (b. 1944) received a BFA from the San Francisco Art Institute in 1970 and apprenticed with Berenice Abbott in the summer of 1974. She has had 68 solo shows since 1980 and has work in many collections including at: the Museum of Modern Art, The Whitney Museum, the J. Paul Getty Museum, The Guggenheim Museum and Reina Sofia Museum in Madrid. She has photographed in 48 countries including Egypt, Yemen, Burma, Cambodia, Russia, Kazakhstan, China, Ethiopia, Sudan, Mali, Iran, Greenland and most recently Greece & Brazil. In 2005 Davis received an Academy Award in Art from the American Academy of Arts & Letters. She lives and works in Hudson, New York & Cape Breton. Artist’s Books include: Space Projects, Illumination, American Monument, Wonders of the African World, & Bodywork.