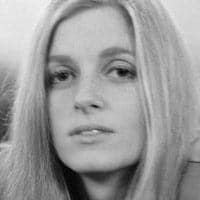 Linda Louise McCartney (née Eastman) became a professional photographer in the mid-60’s. Her pictures during this period chronicled the musical revolution of the decade.