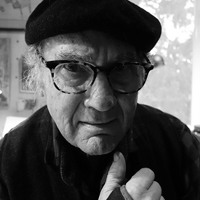 “As my life gets longer, the stories within the pictures that I will show get shorter. After all, photography, though it produces images that ask questions and sometimes come to conclusions, is a very cumulative art form. Especially if the photographer is deeply engaged in depicting the evidence which history attests to of the real world. This lecture won’t be about formality or style, it will be about the wide range of experiences that I have had, most all licensed by the camera with its hunger to be in the front row. My curiosity about all things has drawn me to swing from the poles and assimilate within many, many different segments of human society. My nature is a friendly one. As such I feel familiar with both the rich and poor, the jerks and the saints, the happy and the sad. For some reason – still a mystery to me – I am all people. It is this commonality and sensual empathy that I try to address in my photographs.” – Larry Fink

Though Larry Fink has been a professor at Bard College for 29 years, it’s been said that he’s taught “from Yale to jail” for more than 55 years. A working photographer for six decades, his shows have run around the world, including the Museum of Modern Art, the Whitney, the Andalucian Center of Photography in Spain and Musee de l’Elysee in Lausanne, Switzerland. He’s also been the recipient of two Guggenheim Fellowships, two National Endowment of the Arts grants and, most recently, ICP’s Infinity Award for Fine Art Photography. Fink has worked for The New York Times magazine, Vanity Fair, Bloomberg and many other publications, both current and extinct. He has produced 14 monographs, which represent the aforementioned swing from the poles of experience.